I have had 2 surgeries (one to repair the meniscus and cartilage damage and another to reconstruct the ACL and MCL).

I have 2 metal screws in my knee holding the ligaments together.

I have spent 79 days on crutches, and have only been able to drive for 16 of those.

I have spent 19 days doing physical therapy (PT=pain and torture).

I’ve dropped the soap at least a dozen times.  Just as inmates are advised not to drop the soap, I would give this sage advice to anyone using a shower seat and unable to bend their knee.  I had to roll up the washcloth and swat at it until it was within reach.  It is quite nerve wracking and frustrating trying to get that little sucker back.

Over the past few months I have had to rely on friends and family to taxi me, shop for me, cook for me, and clean for me.  I’ve tried to repay them by buying dinner, offering cash, or paying for their gas, but there really is no amount of money that can recompense their services. What they have all made very clear to me is: “that’s what friends are for,” reminding me of the Dionne Warwick lyrics:

Music is such a powerful medium.  It runs the gamut of emotions; it can make you happy, sad, depressed, angry, and motivated.  Music sets the mood for events such as weddings, funerals, and workouts.  I have always believed that a good DJ/ band could make or break a wedding reception.  I have witnessed DJ’s botch names and play music that did not draw a crowd to the dance floor.  But, my friend Gina had a DJ who was easy to understand and had the dance floor crowded the entire night.  He made that wedding the best one I’ve ever attended!

While I am not musically inclined, I have always enjoyed listening to all genres. I used to carry my walk-man to and from school always making sure I had a back up tape in case the ribbon got stuck. In high school I graduated to a hand-held CD player, and then eventually an iPod, and a cell phone.  Today there are so many ways to listen to music that it’s often difficult to choose one. I have been using Pandora for years, but have recently been introduced to Spotify.

Music often makes me nostalgic.  I love when I’m driving and a song comes on that takes me back to a particular time and place.  For instance, the one that hits home the most (no pun intended here) is Bruce Springsteen’s Hometown, which has always been a favorite that reminds me of growing up in Williamsport, PA.  The line: I’d sit on his lap in that big old Buick and steer as we drove through town…makes me think of my dad and sitting on his lap while he was driving that 1980 Monte Carlo.

I also think of my dad when I hear songs like American Pie by Don McClean, Ain’t No Sunshine by Bill Withers, and Please, Please, Please by James Brown.  But, Tupelo Honey, by Van Morrison is the song that brings automatic tears.  If I ever got married, it would be the song I would play at my reception, dancing with whomever walked me down the aisle and took my dad’s place.

The one song that reminds me of my mom is Oh Holy Night. I only went to Catholic school and Sunday mass by parental mandate and grand-parental obligation.  I do not consider myself very religious at this point in my life, and so Christmas doesn’t have that “let’s celebrate the birth of Jesus” feeling for me.  I celebrate it because it is a tradition.  However, whenever I hear this song around the holidays I picture myself in the pews at a church called Heshbon.  It was the one and only time each year when I actually enjoyed being there.  My mom always sang in the choir’s cantata, and each year she had a solo: Oh Holy Night.  She sang it impeccably.

When Janet Jackson and Jodeci play I think of my good friend Erica Miller (Mil).  We shared hundreds of rides to (Williamsport Area) high school and softball practice listening to these artists. We know every word to every song!

I often have visions of roller skating when I hear songs by Ace of Base, Bobby Brown, C&C Music Factory, the Digital Underground, MC Hammer, and of course the oh so popular song Jam On It, during which you could do the best shuffle!

Any song by Eric Clapton reminds me of the only softball game I ever missed in high school.  My mom offered to take me to his concert in Connecticut, and it was a difficult decision for me.  I hated missing practice, let alone a game.  But, I am glad that I decided to go to the concert because I would go on to play many more games and only had one chance to see this legendary artist/guitarist.

Whitney Houston’s One Moment in Time takes me back to Kalamazoo, Michigan, standing on the infield during opening ceremonies of the 1994 Big League Softball World Series. This undoubtedly was and will be the best athletic event of my life.  I think of the nervous excitement we had playing in front of ESPN cameras for the first time.  And, I think of the bond I had with my teammates, especially Cheryl Godfrey, who took her own life just two years later.

Anytime I hear a song by Bob Marley (off of the Legend album) and Yellow Ledbetter by Pearl Jam I think of my good friend and amazing prom date Mike Arrington.  Those songs will always make me think of the time we skipped school to drive from Williamsport to Philly just to go rollerblading around the city!

When OAR’s Crazy Game of Poker plays I immediately think of my college roommates and how we got to see the band in a small venue.  We used to blast the music in 706 Cool, aka, my occasional grounds for sleeping. We would echo extra lines to the song and sing as loudly as we could.  If you have ever heard this song, it lasts 8 minutes and 50 seconds and I have never cut it off before the end.

My college days were also filled with Wednesday Wing Nights, during which we would watch 90210, Party of Five, and play Spades until the wee hours of the morning. During these intense games, each of which ended in a trophy parade around the living room, we were only allowed to listen to one artist: Jewel.  This was MY rule, simply because I had a slight obsession with her and her music.  I always made sure I sang her songs loud and proud with one hand on the make-shift mic and the other on my chest.  I was passionate.

Most of the music that reminds me of my college days make me smile.  However, when I think about my years playing softball there, I often have nightmares about two songs: All My Exes Live in Texas and Who Let the Dogs Out.  During the fall of my freshman year I remember walking to the plate to the tune of that first song.  That’s when I first realized that I was in the dirty south. Who gets motivated to hit a ball when the song in the background is a slow, twangy country song about ex-girlfriends? The second song was played later in my softball career, when my teammates found out that I hated dogs.  Appropriate, I suppose!

Since college there are other time periods in my life when music has had an impact.  I fell in love with country music when I moved to North Carolina and still listen to it every day! My favorite band has always been Sugarland and I have seen them in concert three times.  Recently Jennifer Nettles left Kristian Bush to tour on her own, and I was lucky enough to experience that concert too! The song Stay reminds me of the girls who lived in Hearthstone Manor with me.  We shared Sunday dinners and jeep rides on warm summer nights blasting this song! Also, my very good friend Allison Houdek sent me a link to the song Little Miss one day when I was feeling rough (mentally and physically) from this injury.  This is the chorus:

Everyone knows I am an avid CrossFitter, so when I am in the gym I prefer to workout to Eminem. My coach and friend George Dobbins knows this about me all too well.  He always manages to find that playlist when I am about to PR a lift or hit a hard wod!

In the fall of 2012 I attended the wedding of my good friends Jeri and Pam.  The music kept us moving the entire night, but there was one song in particular that now has new meaning.  When Meatloaf’s Paradise on the Dashboard Lights came on my girls and I turned into an instant rock band.  It’s now an inside joke between Jamie Nabb and me anytime we are together!

My favorite thing about music is that it can lead to dancing.  Have you ever seen someone dance without a smile on their face? No! Because it is impossible to have a bad time when you are moving to the music.  These are some of my favorite singing/dancing pics:

THE ZAC BROWN BAND CONCERT – Before and After!

BECAUSE WHO DOESN’T WANT TO BE ON STAGE WITH THE BAND!

ENJOYED MANY CONCERTS WITH THESE TWO: BRENDA & ERIC

PIANO BAR ON CRUISE TO THE BAHAMAS! 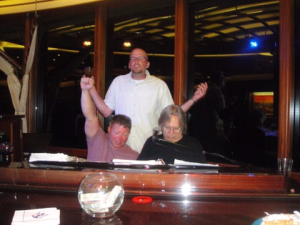 WAVE YOUR HANDS IN THE AIR…LIKE YOU JUST DO NOT CARE!

MUST BE MY SIGNATURE MOVE!

YES IT IS 2015, BUT THIS IS STILL HOW WE ROLL AT THE BRIEL FAMILY REUNIONS! 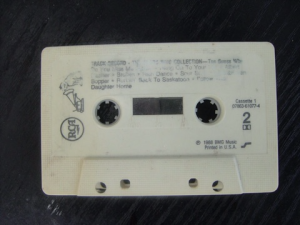 My love for music has led me to 57 concerts.  I have been to small venues such as the Freeman Stage in Delaware, large venues like Lincoln Financial Field, and several music festivals where I have been able to see more than one big name in one weekend!

The first concert I ever attended was on 2/21/1988: Debbie Gibson: Electric Youth! I loved everything about it and couldn’t wait to attend another one!

The best concert I ever attended was Pink.  She isn’t my favorite artist, but she puts on a hell of a show.  She hangs upside down, spinning wildly while having water poured on her, and yet she still sounds flawless.

The following is a list of all the singers/bands I’ve seen that are not in the aforementioned paragraphs:

Hootie and the Blowfish

Moral of the story: Music Saves the Soul.