A love story…for all of you hopeless romantics!

In the fall of 2015 I was at the lowest point in my life. I had undergone several surgeries, endless PT, and I seemed to be regressing rather than progressing. I had lost touch with some of my best friends simply because my daily routine had changed; I no longer spent hours at the gym training because I was still recovering. I started to become angry that I couldn’t workout anymore because being an athlete was what truly defined me.

I desperately wanted to stay involved in the CrossFit community, so I began volunteering at local competitions. On October 17th, 2015 I spent the day at CrossFit Unlocked because Brian DeLeon had asked me to be a judge. Little did I know that that day would change my life drastically. Before I even got home that evening I had a Facebook friend request from Jason Langley, an athlete who competed in a heat that I judged.  I scrolled through his timeline, but he obviously had some privacy settings, as I was only able to see a few pictures. I screenshotted the request and sent it to a mutual friend, asking him what he thought about this Jason guy. His response was “he’s a great guy; I have nothing bad to say about him!”

I accepted his friend request and we communicated via FB messenger. Eventually we exchanged phone numbers and began texting more frequently. Every day started with a text that said good morning and ended with a text that said good night. I found myself anxiously awaiting these messages and wanting to know more and more about this guy. I made it very clear that I was interested in meeting him face to face because you don’t truly know someone until you meet in person.

Throughout the next two months we had sporadic communication. Finally, he asked if I wanted to grab dinner and on December 8th, 2015 we went on our first date. He had asked me to choose the restaurant and I suggested one of my favorite places: Stingray. He said that he had never had sushi, but that he was willing to try (he was more nervous about eating sushi than going on the actual date…and now he loves it!).

He was on time to pick me up and when he stepped out of his large white truck I got butterflies. As cliche as this might sound he was tall, dark, and handsome. We embraced in a hug and then he opened the door for me (something he still does for me a year later). We had non stop conversation to the restaurant, a romantic dinner, and then an amazing first kiss that left me wanting a second date!

He followed up with a text saying that he had a good time and would like to go out again that weekend. But, I had a wedding to attend in Pennsylvania, so I said I wouldn’t really have time. He suggested an early morning date that would allow me to be back home in time to pack for the trip, so I agreed. He picked me up at 5am and we drove to the beach to watch the sunrise. It was one of the most amazing days of my life! This was when I knew…Jason was the one!

We continued to get to know each other by spending quite a bit of time together. We tried to see each other every day, even if just for dinner, or to chat for a few minutes. We rang in the New Year together, jammed out at concerts, met each other’s friends, danced at a wedding, drove on the beach, went to the movies, worked out together, kayaked Rehoboth Bay, hiked Ricketts Glen to see the waterfalls, and experienced many more adventurous things together that have become great memories.  It never seemed like we were moving too fast; it always seemed just right! After a few months he moved in with me and we meshed well in domesticity.

Once we both knew we wanted to pursue this relationship we decided to meet each other’s families. We drove 11 hours to Illinois to spend the Easter holiday with the Langley’s. Jason’s parents welcomed me from the moment I walked into their house. I also met his siblings, three nieces, and some other family and friends. On our way home from Illinois we stopped in Williamsport so that Jason could meet my mom.  A few months later he would get to meet some of my other relatives at the annual Briel family reunion.

Being in a new found relationship after being single for three years and a life changing injury was exactly what I needed. Sometimes people come into your life at just the right time. I was nervous that Jason would get annoyed at having to put up with my limitations.  However, he has never once complained about my slower pace or even having to sleep in a hospital bed with me on his own birthday.

Jason is the most selfless person I have ever met. He does thoughtful things for me every single day, whether it’s making me a cup of coffee in the morning, folding my laundry, or  leaving me a card just to say he loves me!  I enjoy and appreciate every single day I get to spend with him. Today, December 8th, marks exactly one year that we have been together and I look forward to many more years!

ESAC (I am in the white vest, Jason is in the red shirt) 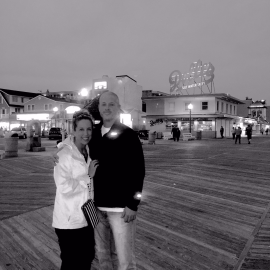 One thought on “He Had Me at Hello”