Every year, for as long as I can remember, I have created a list of short term and long term goals.  In 2017 I accomplished almost everything I set out to do:

Putting my goals on paper and posting them to the fridge where I see them every day helps to hold me accountable.  For this upcoming year I have created 7 short term and 2 long term goals that span my personal and professional life.  This is my list and the story behind each one: 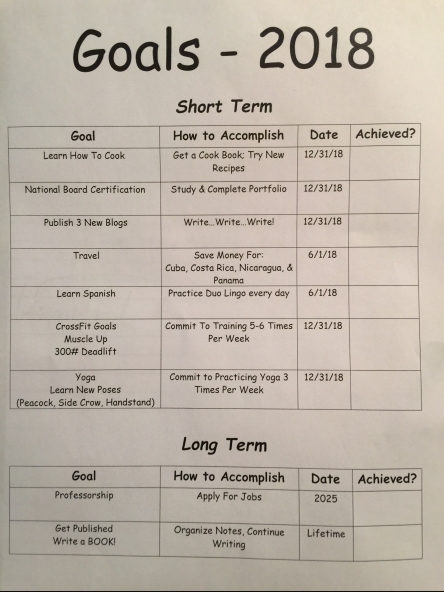 When I was growing up there were lots of women in my family who loved to cook and were very good at it (my mom, grandmothers, aunts, cousins, etc.).  I was always the one girl who avoided the kitchen at all costs.  I hated the fact that cooking is so time consuming, yet meals can be devoured in minutes.  I hated the hustle and bustle of trying to maneuver through a busy kitchen with multiple chefs.  But, quite honestly, I just preferred to be outside playing ball!

As I grew into adulthood I thought I would develop an interest in cooking, but here I am as a 40 year old and I still dread it.  So this year I have vowed to learn how to cook, so that maybe I won’t dread it.  I have a cook book and lots of friends and family who have offered to help.  I will start with a few simple crock-pot meals and appetizers for some upcoming parties.  I even watched Rachel Ray a few times over Christmas break! I hope to find a new found love for cooking!

In 2005 I started the process to obtain the National Board Certification for Professional Teaching Standards.  I took the test and completed 3 of the 4 written portfolio assignments.  I have always regretted not finishing that last component because 1.) I lost out on a 12% pay increase, and 2.) it is the highest credential on a teacher’s resume.   But, soon after that school year a moratorium was placed on the stipend.  So, I never thought about it again…..until now.  I recently learned that legislation was passed to reinstate the stipend.  Albeit, not 12%, but a monetary incentive that will pay itself off over the next year and a stipend that will last for ten years.  With only 12 years left in my career, I figure now is the perfect time.

While I don’t blog often, I have enjoyed being able to share so many aspects of my life including teaching, CrossFit, yoga, travel, relationships, etc.  I love being able to go back months or even years later to read these stories.  I can only hope that somewhere along the thousands of words I have written that someone out there found some motivation, inspiration, or even a little love!

I got the travel bug when I studied abroad in college, and since then I have been to 21 countries (some multiple times).  This year I am taking several students to Costa Rica, Nicaragua, and Panama for 10 days.  I have put a lot of time into recruiting and planning and now I look forward to submersing myself in three Latin American cultures.

One week after I return from the above trip I am traveling to CUBA with my mom.  Since her retirement nine years ago she has become quite the travel guru, surpassing my total number of countries visited.  She has asked me to join her on several of those trips, but they always seem to happen during the school year, when I can’t take days off.  However, this year she is taking her international trip in the summer, so now I can join her!  ***This will be the first time in my 18 year career that I don’t teach summer school!

I took three years of Spanish in high school and have always enjoyed learning a new language.  I have been able to use those very basic skills in a few of the countries I visited over the years to help me get by.  But, since I am traveling to four Spanish speaking countries this summer, I decided that now would be a good time to really hone in on my Spanish.  I have been practicing daily with an app called Duo Lingo, which is very user friendly and even kind of fun.  I don’t have hopes of being fluent in only a few months, but I hope that I can put together sentences rather than just a few words here and there.

Two days before my injury I was in the best shape of my life (honed in on my diet, having completed a 12 week Olympic Lifting cycle, and training really hard).  I had spent many nights doing progressions for the elusive movement in CrossFit: the muscle up.  I finally did ONE on Thursday, May 13th, 2015.  I was on such an athletic high from finally achieving that goal.  But then eight hours I had a major injury that kept me from the gym for well over a year.  While I am now back to training and have gotten back most of the things I lost….the muscle up is still hanging over my head (literally and figuratively).  I plan to focus more on the progressions and transition drills so that some time in 2018 I can finally mark it off of my list.  —  I also have a goal of hitting a 300# dead-lift (my favorite barbell movement).  My pre-injury PR was 285# and right now I can pull 265#.  I am following my gym’s strength program for the next six weeks and hopefully I can come closer to that 300 Club!

I became a certified yoga instructor in April of 2016.  Since then I have been teaching three times per week: twice at CrossFit Unlocked and once at Mispillion Fitness.  I also try to practice a little on my own or drop into a local class every once in a while.  There are so many poses I can do now that I could not do when I started teaching (Crow, Firefly, Bird in Paradise, etc.), but there are also a few that I would like to add to my practice this year (Peacock, Handstand, and Side Crow.)