PB & J, macaroni & cheese, and cinnamon toast were staples in my house when  I was growing up. The pantry was always stocked with Honeynut Cheerios, spaghettios, Middlesworth BBQ chips, and tasty-cakes.  The refrigerator was never void of soda. Needless to say nutrition was not a priority when I was a child, and since I was uber-active I was able to maintain a fast metabolism.

But then I went to college, and despite playing a division I sport, where we conditioned and played ball every single day, I managed to tack on that dreaded freshman 15.  The meal card allowed me to eat at any cafeteria on campus, most of which offered all-you-can-eat menus and limitless soda.  In addition to poor eating habits, I participated in the typical late night college activities that included liquid calories.

After college I continued the same dietary routines, but began running excessive miles thinking it would negate the extra calories.  I joined the gym, where I took spin classes, body pump classes, and spent hours on the elliptical.  I was a calorie burning machine, but I was still eating like crap.  I used to live by the mantra: calories in/calories out.  But, here is an analogy that helps clarify why this is NOT a good idea:

Let’s say I was on a 1,200 calorie diet. Well, a King Size Reese’s is 400 calories.  So, if I eat 3 of them each day, will I lose weight?! NO! Why? Because I would not be getting the right kind of calories.  In each pack I would have consumed 24 grams of fat, 34 grams of carbs, and 8 grams of protein.  This is NOT a good balance for someone who wants to lose weight and gain muscle. 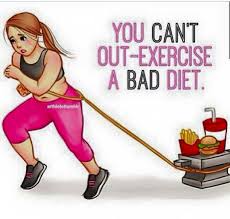 After my experience at a few globo-gyms and logging hundreds and hundreds of miles running on the road, I started to train at a CrossFit box.  Most of the people there practiced a zone diet, in which they counted blocks (units of food) per their body weight, gender, and activity level.  I did this for several months and did not see any results.  I found it very cumbersome to have to calculate all of those blocks for every single meal and snack each day.

A few years later I participated in my first Paleo Challenge.  For 30 days we had to follow a prescribed list of what foods to eat and what foods NOT to eat.  If you could hunt it, pick it, or grow it, then you could eat it.  I found this a little easier to follow than the Zone diet, so I did well in my first month.  The problem was that there was an end date to the challenge and apparently that was the end to my motivation.

Every January our gym did this Paleo challenge, eventually expanding it to a 60 day competition. The more I did it, the more results I saw, and that was incentive to stick with it.  For years I followed an 80/20 plan (80% of the time I ate Paleo, while 20% of the time I enjoyed treats).  I was able to maintain a healthy weight and continue to perform well in the gym with this combination.

In 2015 my coach persuaded me to try a new type of challenge called the Whole 30.  For 30 days we had to “cut out all the psychologically unhealthy, hormone-unbalancing, gut-disrupting, inflammatory food groups.”  This was a very drastic change for me as I was used to having a balance of healthy and yummy foods! I decided to commit to this strict diet and it was a good reset for my nutritional imbalance.  However, this was not sustainable for me because of the deprivation.

Most recently I did some research about a program called Flexible Eating, which involves macro accountability.  I had heard of maco-nutrients before, but I never really understood the importance of them, nor how to calculate them.  I consulted some friends who had seen tremendous results, and then decided to give it a try.  I watched a few videos by Jason Ackerman, to find the formula to calculate MY numbers, which are based off of MY goal weight and MY activity level.

The numbers have changed as I have increased my activity level:

This might seem a little complicated, but once I had the numbers for the total amount of protein, carbs, and fat that I should consume daily, then it was only a matter of plugging them into the My Fitness Pal App.  I entered these numbers into the goals section of the App and then started tracking my foods.  The App allows you to manually enter the foods, scan the bar code of the item, and/or search restaurants with a menu list.  I have found that this method holds me accountable.  I have learned to become a macro-matician (to use the term coined by my friend Stacey Evano), by planning ahead.  If I plug in the foods I want to eat for certain meals, then I know exactly what is left for the day and can have some fun figuring out what foods fit the left over macros! Sometimes I end up with an interesting evening snack combo! I love this way of eating because it does not leave me deprived, yet holds me accountable!

#iifym (if it fits your macros)

I also love that one of my favorite CrossFit athletes (Lauren Fisher) follows this plan.

The point to all of this is: Do what works for YOU!  Maybe you eat a high protein diet, with some veggies and fruits for carbs like my friend Michael Scharmach did while following a body-building regiment.  Check out her transformation:

This certainly worked for HER!

Or…maybe you enjoy counting points on Weight Watchers or eating Jenny Craig meals. Maybe you occasionally use Isagenix shakes to do a cleanse.  Maybe you follow the Advocare lines to supplement what you are missing in your diet. Maybe it took a lap-band surgery to get you headed down the right nutritional path. Maybe you don’t count anything, but just make conscious efforts to know the difference between processed and non-processed foods. There is no protocol for all human beings because we have different body types and activity levels.  Just be healthy so you can live a long life! 🙂